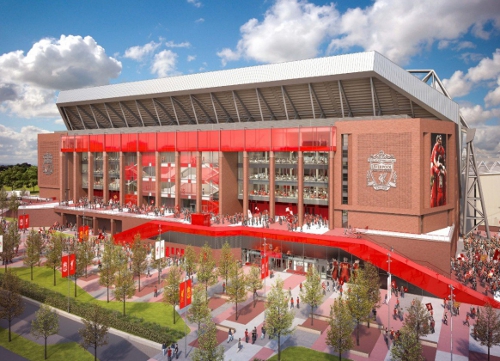 The ongoing regeneration of Anfield is moving in the right direction councillors said tonight, following a site visit to the area.

Members of Liverpool Council’s Regeneration, Housing and Sustainability Select Committee said that the Anfield Regeneration Project is making massive improvements to the lives of people in the area around LFC’s stadium.

Since that time houses that had fallen into disrepair have been refitted and sold on to local people for just £1 in a bid to build back up communities that there wrecked by years of uncertainty over Anfield Stadium’s expansion plans.

For the first time in a long time there is a waiting list of people who want to move into Anfield and there is talk of property values rising.

Councillors who visited the site on Monday said they had been “really impressed with improvements”.

The redevelopment of LFC’s Anfield football ground is expected to be finished in time for its June 2016 deadline, the committee reported. A 650-tonne roof truss was secured to the main stand of Anfield on July 24 - meeting the redevelopment’s building schedule.

Other plans include a 100-bed hotel and commercial premises at the new Anfield Square - the former housing site between Gilman Street and Pulford Street.

Your Housing Group is also proposing to relocate its Liverpool head quarters to Anfield Square.

Sub-standard and derelict properties are being demolished to make space for the new site and around 200 private properties have undergone major external improvements.

A new retail-led high street is planned for Walton Breck Road and Oakfield Road and a total of 770-new jobs are to be created.

Assistant director for development planning and housing, Mark Kitts, said: “The project is bringing hope to an area that felt neglected. It’s a really exciting project.

“In areas like Anfield we really see the benefits of regeneration - people want to live in the area again. So far, it’s a really successful project.”